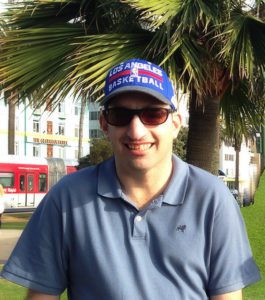 My son, Brandon, had autism, intractable epilepsy and severe learning disorders.  He also had frequent grand mal seizures, which would occur without warning.

Those limitations would have been more than enough to keep Brandon at home and not allow him to live an independent life.  But Brandon seldom asked for anything, so when he insisted on living on his own and become independent, I had to listen.  As shocking as that was for me to hear, I had to say yes. Even though my immediate family and many friends thought I was out of my mind to allow him his freedom my heart told me that what I was doing was best for him. It just felt right, although I was scared to death, because he was so very naïve and extremely limited in what he could do.  Nonetheless, he was determined to live on his own.

Brandon was 23 years old as he began on his path to independence. He had one predominant skill; he was good with numbers and was able to balance his checkbook.  That was a terrific skill to have, but other than that he started from ground zero.  It was not easy for either one of us.  I worried about my son all the time and I mean all the time.  For the first six months, I don’t think I slept while Brandon was on his own.  During the daylight hours I would spend all my time with Brandon showing him around his new neighborhood and familiarizing him with the bus routes, local pharmacies, restaurants, grocery stores, and answering any questions he had.

He had to learn everything the way he could learn it, and that was his way, not mine. He could not cook since the fire from the burners on the stove scared him.  He never turned on his heater because he was afraid of that too.  He had great difficulty with his fine and gross motor skills.  He was unable to open cans and items wrapped in plastic.  He struggled trying to open his front door, it took him a very long time to get the key in the lock. He seldom said what he meant or meant what he said.  He had no friends.  Initially, he did have a part time job, which did not last long. He had numerous hurdles to get over but in time he got over the ones that mattered to him and made his life work his way.   The words “his way” are very important words to remember.

As you can see it sounds like it would be impossible for Brandon to make it on his own and it would have been if I insisted he do everything my way.  Instead, I let him take the lead and I watched with amazement the way he maneuvered throughout the days.  He was able to get things accomplished and get his chores done and slowly began to get a feel of how to live life on his own.  Yes, it took time, and plenty of it.  Nothing he did would be the way I would have done it, but that is not important, he got things done and that was all that mattered.

Many professionals feel our children must have these skills before embarking upon independence.  However, I strongly disagree because if we wait for them to learn these skills in most cases it will be too late or it will never happen.

Your children will learn life by living life.  That is how we all learn and our children are no exception.  Of course, don’t get me wrong we are not going to drop off our children somewhere and hope for the best.  No, we are going to have a plan, which over the years will need many revisions.  However, in time your child too will find his or her own way.

Courage comes when you know there is something more important than your fears.

Trust, courage, belief and letting go in a timely manner will help you and your child advance to the next stage.  Yes, there will be plenty of setbacks and challenging situations you will have to figure out.  But the longer your children are out in the world the easier it will be for everyone involved.  I know that to be true.

Brandon and his best friend Tony, he was like a father to him.

AIF was founded in celebration of my son, Brandon a courageous man who never allowed his numerous limitations to stop him from living his dream of independence.  His determination paved the way for others by demonstrating anything is possible.

Brandon was 41 years old when he passed away. He was my best friend and my finest teacher.

May he rest in peace,

Visit Amalia’s website for information on her speaking and to purchase her books at, www.AmaliaStarr.com.